Will Ferrell stars in Kicking and Screaming as Phil Weston – a man dealing with his feelings of inadequacy after being raised by an overly competitive father (Robert Duvall). He becomes a soccer coach in a league where his father coaches another team. Phil tries to change a group of misfits into a championship team.

This is strictly a formulaic movie casting Will Ferrell reacting to people and events with his usual exaggerated style. Fans of Will Ferrell will enjoy this movie as his antics do rate some laughs. Robert Duvall gives a good performance in his role of an uncaring father who drives his son to distraction.

The show stealing performance comes from former Chicago Bears football coach Mike Ditka who plays an exaggerated version of himself. His ranting and blustering is the highlight of the movie.

The themes of the movie do become heavy handed at times in telling how bad an over-competitive parent can be. As with most movies these days, a pro-gay lesson is jammed into the movie to tell us that two lesbian parents are just as good (if not better) than traditional family.

This movie will provide laughs if you can get by the PC elements.

Missing Vietnam Servicemen to Be Buried
How do you bury someone who is missing?

Airports Not Rushing for Private Screeners
Aiports is now rushing for the Cleveland Browns. Hopefully, Joseph Airports will get 1,000 yard season this year.

U.S. stocks look to extend winning streak
Stocks are now four games ahead of bonds in a strike-shortened season.

Submarine Crash Could Have Been Avoided
Gee, ya think?

And finally, have you ever wondered how you date a photograph? Apparently it is more complicated than you would think according to a Reuters story:

This undated photo released by the U.S. Department of Defense shows the casket bearing the body of US Navy Machinist’s Mate Third Class Nathan Taylor being sent over the edge of the USN Aircraft Carrier USS Enterprise as US Navy Sailors conduct a Burial at Sea ceremony on May 19, 2004.

I’m betting the photo was taken the day of the burial, but I’m just guessing there.

The trailer for Narnia: The Lion, The Witch, and the Wardrobe premiered tonight. No link to it on the web yet.

This is going to be the movie to see at Christmas though.

As a fan of previous Scottâ€™s previous movies Gladiator and Black Hawk Down, I was expecting a graphic depiction of the battles in the Crusades. In this regard, Ridley Scott tops himself in the gore-fest Kingdom of Heaven.

The battle scenes are as good as any war movie and twice as bloody. The R rating is deserved. Honeybun got more and more squeamish throughout the movie. Do not take children to this one. Artistically, Ridley Scott (as he did in Gladiator) was able to convincingly bring a historical place to life. Even so, the movie was visually impressive, the scenery of the middle ages, the city of Jerusalem and especially when showing the vast Muslim and Christian armies arrayed on the field of battle.

The movie had two main problems. The main character Balian â€“ played by Orlando Bloom – was just not believable. The movie does not explain how a blacksmith (the illegitimate son of a nobleman) who inherits his fatherâ€™s lands happens to be an expert in agriculture, engineering, and tactical warfare. A contributing factor was that the dialogue was sometimes hard to follow and as a result it sometimes became confusing on who new characters were and what motivated them.

The other issue is the historical portrayal of the Crusades. Scott points out every failing of the Christian armies. In contrast, Muslims are portrayed as entirely honorable and the spread of Islam by the sword is only briefly mentioned but discredited as the comment comes from a corrupt priest.

If you like battle scenes, this movie is for you if you are patient in getting through sometimes slow dialogue. If you want to see an accurate portrayal of the issues surrounding the crusades, you wonâ€™t find it here. 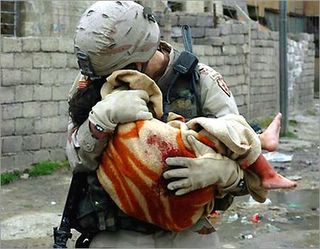 Major Mark Bieger comforts a wounded girl while taking her to a military hospital. The child didn’t make it.

Update:
The writer who took this picture has his own blog where he relates the story.

So-called martyr’s think they are heroes for blowing up the own countrymen. This photo show not only why we need to stay and fight, but also why we will win. The only way we will lose is if the U.S. loses heart and pulls out. Then all the sacrifices will be in vain.

The terrorists’ desperation in targeting children shows we are winning. Their own countrymen will not stand for this continued slaughter.