U.S. Senator Ken Salazar says he regrets calling Focus on the Family “the Anti-christs of the world.” He really meant they were just “unchristian”.

He then tried to reason away the reason for the dispute. Focus on the Family points out that during his run for office Salazar said that President Bush’s judicial nominees deserve an up or down vote.

Salazar now says that he changed his position because Republicans have proposed changing senate rules so Democrats can’t filibuster the nominees.

No, it doesn’t make sense. But apparently, its the Democrat way. This past Sunday, U.S. Senator Ken Salazar called James Dobson and Focus on the Family the anti-christs of the world. That was not long after he complained about combining religion and politics by the way.

Is the rhetoric approriate for a U.S. Senator?

Let’s see, the Mavericks lost 98-86 in their last game against the Rockets. Isn’t it true that any time a team loses, they have room for improvement? 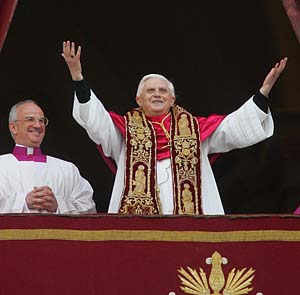 Today Cardinal Joseph Ratziner was elected Pope Benedict XVI. For the past 23 years, he served in the Vatican as guardian of the church doctrine. Liberal theologists will surely be disappointed that Pope Benedict is not the kind of man who will change the church’s teaching to approve of abortion, gay marriage, or female priests.

It’s a great day for Catholics though. As Honeybun and I were just confirmed in the Catholic Church at Easter, this is an exciting time for us.

A new pope! How cool is that?

Last night was the annual ritual of “springing forward” – the beginning of daylight savings time. It’s days like this that I wish I still lived in Arizona, a state that is smart enough to realize that no matter what you do with your clock, there will still be the same number of hours of daylight in a day.

According to standardtime.com there is an increase in the number of traffic accidents on the Monday after the time change. So why do we keep doing this. I want my hour of sleep back.

I was at work when I heard the news. Obviously, the news wasn’t surprising.
The world watched him deteriorate over that last few years. As I was watching the news coverage, I realized I had forgotten what a strong presence he was. Old news clips really show a vibrant man of faith.

Honeybun and I went skiing today. Great weather, good snow. The important thing to remember though is that only a man who is really secure in his masculinity will let his wife see him fall on the slopes….repeatedly.