It’s time for another round of annual predictions. Out of my 10 predictions last year, I’m claiming five were right on – a 50% accuracy rate. That’s pretty good for a charlatan. So without further ado, here is what I think 2007 has in store for us:

1. Republicans will fail to gain control of the U.S. Congress in 2007 elections. (Yes, I know there are no scheduled federal elections but this is still a pretty risky prediction if you are among the moonbats that swear George Bush is a dictator who is ending our democratic government).

2. Saddam Hussein will be executed before the end of January 2007.

3. Mahmoud Ahmadinejad will resign as President of Iran after nude photos of him appear on the cover of National Enquirer. Before resigning, he will try to claim “I was young. I needed the money.”

4. An Eastern European country will pass a law allowing the death penalty for spammers. Amnesty International will support the law.

5. I will write a parenting guide called “It takes a Daddy.” The Today Show will book me for March 17th, but will drop the segment after realizing the book isn’t titled “It takes a Paddy” and therefore is not appropriate for a St. Patrick’s Day story.

6. Microsoft will publish Windows as open source software after seeing the rising threat of desktop dominance from Linux. In a competing strategy, Apple will triple the price of Mac computers.

7. The San Diego chargers will almost win the Super Bowl.

8. The pope will again continue to remain Catholic.

We brought Bailey home today. Showed her around the place but she didn’t really notice much as she didn’t open her eyes at all this afternoon.

Cowboy, the black lab tried to sniff her to death. I think he was the most excited of everyone. He’s great with kids so he won’t do anymore than that. The cats were pretty much disinterested. They’re still trying to figure out what is this little bundle that fidgets so much.

And the Denver Broncos ended a four game losing streak on the first Sunday Bailey was in front of the TV. Coincidence? I don’t think so. 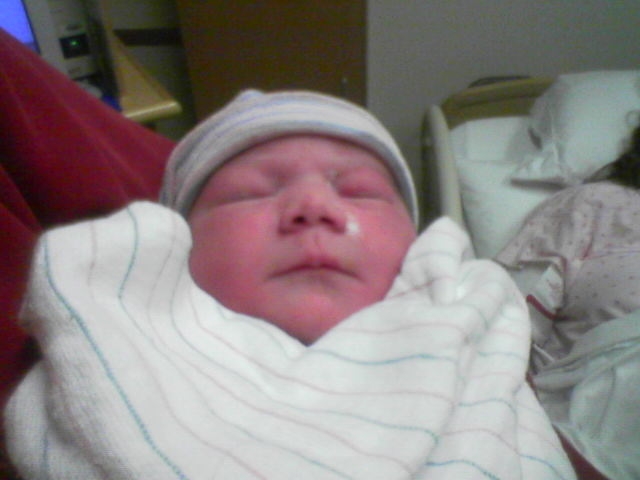 No news has been good news. The pregnancy has gone smoothly since my last post. The only glitch was when Honeybun fell a couple of weeks ago. She sprained the wrist on the arm she had surgery on in April. No danger to the baby though.

I’ll be picking my mother-in-law up from the airport this evening then Honeybun goes into the hospital tonight to begin the induction for labor and delivery.

The Nativity is the live-action retelling of the birth of Jesus. For Christians everywhere, its story is the reason for the celebration of Christmas. In order to fully understand the movie, some familiarity with the story of the birth of Jesus is required, so if you’ve never been to church or read the Bible, it might all seem a little weird to you.

While my brother is a devout Catholic and we were both raised in Protestant churches, I am no longer particularly religious. That doesn’t mean, however, that I can’t appreciate a good story. It was easy to sympathize with a young Mary. She was from a poor family, betrothed to Joseph, supposedly a virgin, and yet still somehow pregnant. An angel told her that she would give birth to Jesus, but she was the only one he spoke to. With the exception of Joseph, no one else in town heard from the angel and Mary’s pregnancy was not exactly considered proper.

The Magi provide the comic relief in the movie. Reading through prophecy and observing the stars, one of them decides to follow the star to Israel eventually ending up in Bethlehem with the others. During the journey, they banter back and forth with one another about whether or not leaving home was a good idea. After they meet the baby Jesus, though, the three Wise Men leave happy that they made the trip.

The story has two substantial deviations from the Biblical text. Both of the occur after the birth of Jesus. In the first one, the Magi are leaving Bethlehem. In the Bible, an angel came to them and told them not to return to see King Herod. The movie, on the other hand, shows one of the Wise Men telling the others that he thinks it would be a bad idea to see Herod before their return home.

The second deviation from the Bible occurs when the angel appears to the shepherds at night. The Bible says that a choir of angels appeared, but the movie does not show them. Perhaps the special effects budget was to blame for that deviation, but it was still disappointing. This could very well have been the best scene in the movie.

The Nativity is a worthwhile Christmas movie. Despite a couple of intense scenes where pregnant women (first Elisabeth, then Mary) are giving birth, the movie is family-friendly. For those who enjoy the story, it could be an enjoyable way to spend Christmas Eve or even Christmas Day.