Honeybun and I were at the local Safeway the other night. One of the checkers has a note written on her apron that says “I’m deaf”. Next to that note is another note that says “DEAF PRIDE”.

Now I think it is admirable that this young woman is being a productive member of society. I do wonder about her deaf pride statement. What exactly is there to be proud about in being deaf? Should she be admired for being deaf?

I was mostly kidding when I posted an fictional account of a studio planning meeting for a remake of the Ten Commandments movie.

Now, Hollywood has topped me. A couple days ago producer Jerry Weintraub announced he would remake the movie Oh God! Who would they pick to play God? Ellen Degeneres was Weintraub’s obvious choice. Once again confirming that Hollywood has no clue about mainstream America.

Honeybun had knee surgery on Wednesday. She is doing well and already hopping around in her knee brace.

That night I had my first grad school class. The instructor has a mohawk. Really.
CU Denver is a strange place.

The Yahoo! upcoming movies site has an Internet poll asking which Paramount movie readers would like to see remade following the example of The Stepford Wives and The Manchurian Candidate. One of the choices is The Ten Commandments (leading the voting as I write this).

Unless Mel Gibson is involved, I would be worried that the movie would be changed. What would that planning meeting look like?

Producer: Yeah, but The Ten Commandments movie was made in the 1960’s, what with its commandments and good guys and bad guys. We need to update it for a “sophisticated” modern audience that isn’t blinded by religion.

Writer: You’re right. We’ve got another problem. The Israelites can’t be slaves to the Egyptians, that’s anti-Arab and so “BC”. How about Palestinians trying to flee evil Israeli occupation?

Studio Head: I think you’re on to something. Maybe we can get Michael Moore to star as Moses the Palestinian.

Writer: That’s so sexist, why does Moses have to be a man?

Producer: How about Rosie O’Donnell? We can make it a comedy. Madonna can appear as Pharoah…I mean the Israeli Prime Minister – she’s into Kaballah right?

Producer: There is still the problem with the Ten Commandments.

Writer: Well, everyone knows the commandments are really metaphors for ten reasons not to re-elect George Bush.

Producer: You’re right. But where in the movie can we get Charlize Theron to take off her top?

I went to a “take and bake” pizza place yesterday. You buy your unbaked pizza there and bake it at home. Included with the pizza was a flier that announced their customer appreciation days were coming up. 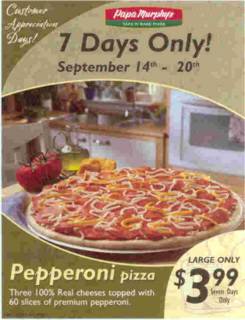 Really. Who comes up with this stuff?

Got news today from CU Denver:

Dear Jason:
We are pleased to notify you that you have been admitted to the Masters of Science in Technical Communication Program at CU Denver.

Woohoo! Now I just need to figure out how to pay for it and how to get a work schedule that will allow me to attend the evening classes.

This past Sunday, Honeybun, her parents and I went to the Cheyenne Frontier Days rodeo. Honeybun really gets into that kind of thing. I think it may be time to buy some boots and a stetson.