Matt Hicketheir is a young Marine completing his training before shipping to Iraq for a year. His father and mother took him to The Fort, a very expensive restaurant in Morrison, CO, this past Tuesday to celebrate before their only son left. President Clinton ate at this same restaurant when he visited Denver a few years ago.

The entire family dressed up. Matt wore his dress blues and his mother and sister wore their best dresses. They spared no expense in their dinner on this special occaision even though it was a hit on the pocket book. They drank champagne and ordered exotic dishes like rattlesnake, quail eggs and buffalo tongue to enjoy the time they had with their son and brother. This occaision was a special one that deserved some indulgence.

When they were finished, the restaurant told them another customer had given the manager his credit card and told him to keep the Hicketheir’s tab open. “Anything they order is on me,” he told the manager before he left. The man only insisted on one condition, that he remain anonymous. The Fort has kept the man’s confidence admitting only that he’s a businessman from Texas who was in town for a few days. He had been sitting at a nearby table and apparently was able to gather why the family was there.

This man’s kindness was great example of someone demonstrating love their country and the troops who fight for freedom. His avoidance of attention for his actions show what a truly kind heart this man has.

Update:
A number of people beat me to this story including:
Peenie Wallie
Michelle Malkin
Hugh Hewitt

The following story is from This is True dated 17 July 2005. It is
Copyright 2005 Randy Cassingham, all rights reserved, and reprinted here
with permission:

After more than 100 dead dogs were dumped in a trash dumpster over four weeks, police in Ahoskie, N.C., kept an eye on the trash receptaclebehind a supermarket. Sure enough, a van drove up and officers watched the occupants throw in heavy plastic bags. They detained the two people in the van and found 18 dead dogs in plastic bags in the dumpster,
including puppies; 13 more dead dogs were still in the van.

Police say the van is registered to the headquarters of People for the Ethical Treatment of Animals, and the two occupants, Andrew B. Cook, 24, and Adria Joy Hinkle, 27, identified themselves as PETA employees.

An autopsy performed on one of the dogs found it was healthy before it was killed. Police say PETA has been picking up the animals — alive — from NorthCarolina animal shelters, promising to find them good homes. Cook and Hinkle have been charged with 62 felony counts of animal cruelty.

In response to the arrests PETA President Ingrid Newkirk said it’s against the group’s policy for employees to dump animals in the trash, but “that for some animals in North Carolina, there is no kinder option than euthanasia.” (Roanoke-Chowan News-Herald) …Oops, my mistake: that’s
“Playing God” Defined.

In his author’s notes section, Cassingham had more to say about this
story:

The more I learn about PETA, the less I think of
them. The story of them killing animals isn’t even unusual. According to PETA’s own filings, in 2004 PETA killed 86.3 percent of the animals entrusted to its care — a number that’s rising, not falling.

Meanwhile, the SPCA in PETA’s home town (Norfolk, Va.) was able to find loving homes for 73 percent of the animals put in its care. A shortage of funds? Nope: last year PETA took in $29 million in tax-exempt donations.

It simply has other priorities for the funds, like funding terrorism (yes, really). But don’t take my word for it: I got my figures from http://www.PETAkillsAnimals.com — and they have copies of PETA’s state and federal filings to back it up. The bottom line: if you donate money to PETA because you think they care for and about animals, you need to think some more. PETA literally yells and screams about how others “kill animals” but this is how they operate? Pathetic.

And you know what I wonder? PETA’s official count of animals
they kill is 86.3 percent. But if they’re going around picking up
animals, killing them while they drive around and not even giving them achance to be adopted, and then destroying the evidence by dumping the bodies in the trash, are those deaths being reported? My guess: no. While 86.3 percent is awful, the actual number is probably much, much higher. How dare they lecture anyone about the “ethical” treatment of animals!

(This is True is a weekly column featuring weird-but-true news
stories from around the world, and has been published since 1994. Clickthe link for info about free subscriptions.)

My brother had the deep thought of the day:

“What I can’t figure out is why it’s free to apply for a credit card, but then they charge you postage to pay the bill.”

The U.S. Post office is asking congress to allow them to raise postal rates. They want to increase the price of a first class stamp to 39 cents.

It keeps getting more expensive to pay your bills if you mail them in. Watch Internet bill paying services get more subscribers as well as companies develop ways to pay them directly without have to send in a payment.

Honeybun is out of surgery and is doing fine. No complications. Doc said, she should be back to 100% in a few weeks.

Doing fine. Honeybun just got out of surgery and everything is good. No complications.

Early this morning I had to take Honeybun to the hospital. They ran some tests and found she has appendicitis. She’s going into surgery in a couple of hours. I came home to take a shower and grab a couple things before heading back (who needs sleep?).

Please pray for Christy for a successful surgery and healthy recovery.

A rapper is complaining about get firing as an airport screener for recording songs that talk about commiting terrorism.

In an interview on Fox News, the rapper said, “It’s just entertainment.”

The good news is that the Transportation Security Administration didn’t get cowed by claims of free speech. Common sense finally prevailed.

Would you want this guy screening bags at the airport you were traveling through? 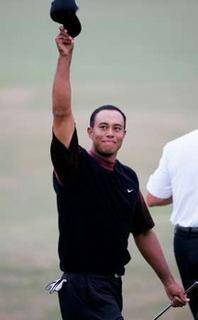 Tiger woods won his second British Open today. It is his tenth major championship title. It seems only a matter of time before he beats Jack Nickalaus record of 18.

Instapundit.com has a round up on the implosion of a scandal. For those who don’t know – and that’s most of you because only political junkies and left-wing wackos care* – Karl Rove is being attacked by Democrats who are calling for him to resign.

I know, who is Karl Rove? He is President Bush’s Chief of Staff. Karl Rove was also the strategist behind the Presidents campaign for election. He is also considered the ultimate evil by radical liberals (i.e. most Democrats it seems).

Bear with me for a little background. Karl Rove is accused of “outing” a covert CIA operative who is the wife of a U.S. diplomat who criticized President Bush. The accusation is that Rove outed Valerie Plame to get even with her husband.

Democrats are calling for Rove’s resignation and they are trying to pass a law to revoke security clearances for anyone revealing the name of a covert agent. Dems think they can put Rove out of a job by getting his clearance revoked.

The problem is it looks like Rove didn’t break any laws. Plame was not an covert agent.
– She had been working in Langely for years.
– She was married to a U.S. diplomat (not a good cover for an agent).
– She freely admitted to friends and neighbors she was a CIA employee.

Rove didn’t reveal her name. The press told him who she was. You can’t reveal facts to people who already know the facts.

So what it sounds like is a U.S. diplomat who was lying about President Bush got caught lying. His deflection was to blame the administration for pointing out that he lied (How dare they!).

Here is where the genius comes in. The administration seems to have a strategy for dealing with accusations made against the president.

1. Don’t immediately respond to allegations.
2. Let your accusers work themselves up into hysteria.
3. Weather the storm until the truth comes out.
4. Truth comes out and discredits your accusers.
5. You are now in a stronger position because your accusers and political enemies have been shown to allow their hate of you to affect their judgement.

It takes patience, and a thick skin to allow your enemies enough rope to hang themselves.

(*I guess that makes me a political junkie but I’m in a program to overcome it.)