Honeybun stopped at the grocery store this afternoon to pick up some things. Before she went in she put some lotion on her hands. It wasn’t until she got home that she realized her wedding ring was missing. She had taken off her ring when she put on some lotion. A call on her phone distracted her and she forgot the ring was in her lap when she got out of the car.

I left work and met her at the store to hope we could find it. Found the parking space, no ring. We went inside to see if someone might have turned it in. No such luck. We gave our number to the manager in case someone might turn it in later then posted a note on the store’s bulletin board.

Now this was a pretty nice ring if I do say so myself. I thought “its gone, no way someone is coming back with it now.” I went back to work to finish my shift planning to call the insurance company in the morning.

But whaddya know, Honeybun got a phone call a few hours later, “This is the manager from King Soopers (the manager has the same first name, with same spelling as Honeybun) and I have a note from a man with the same last name as you that found a ring. I thought at first you were his wife but apparently it is just coincindence.” She gave Honeybun the number to contact Rich.

Unbelievable. What incredibly generous people. Rich and Tammy didn’t want a reward, in fact they refused when we offered. Honeybun was in tears when she first spoke to Rich and believes that God does answer prayers and miracles happen.

I stopped by their house on the way home from work and they gave me the ring. It isn’t perfect, clearly it got run over, but the diamond (the really expensive part) doesn’t seem to be damaged. Hopefully our jeweler can repair it, but if not, we’ll get a new setting.

Thanks Rich and Tammy. There still are good people in this world. 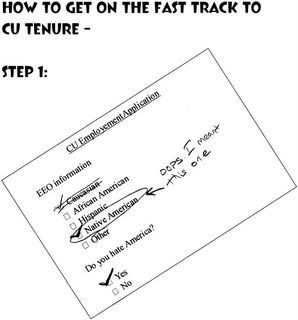 Jeff Gordon won his third Daytona 500 race today at the age of 33.

The first must-see summer blockbuster of the year is being released in February. I saw an advanced screening of Constantine this past Tuesday. Keanu Reeves stars as John Constantine. Constantine is a super-natural detective and exorcist. Born with the gift (or curse) of being able to see half-breed demons and angels in the world, Constantine was driven to commit suicide. However, Constantine was resuscitated. Now, condemned for committing the mortal sin of suicide, Constantine is trying to earn his salvation by fighting against the devilâ€™s minions.

Rachel Weisz stars as Angela Dodson and her twin sister Isabel. Police detective Angela is on a mission to prove her sisterâ€™s death was murder and not suicide. Angela seeks Constantineâ€™s help on her journey where both hope to find peace.

Keanu Reeves gives his best acting performance yet in Constantine. His convincingly portrays a cynical man who hopes to find salvation but is held back by his own selfish motivations.

Weisz give a good performance as Angela and does as well as she can as the person who the audience most identifies with. Angela is the person who does not understand the struggle between heaven and hell. It is through her we discover what is really in the world. However, Weiszâ€™s best moments are in her eerie portrayal of the twin sister Isabel.

Any movie dealing with heaven, hell, and salvation is a magnet for controversy. This movie will undoubtedly draw that controversy but the producers did an admirable job of balancing the spiritual with the secular. Some Christians may disagree with the details of the movie, yet the messages do not disagree with their worldview. At the same time, non-Christians should not feel uncomfortable with the themes of the battle of angels and demons.

This balance also extends to the way the movie spreads comic relief among the parts that will make you jump. Special effects are excellent especially in the scenes in hell and the depiction of the demons. Stop motion is especially effective throughout the movie.

Although there is no nudity or sexual situations, the movie is accurately rated R for depictions of demons, violence and language (the “f” bomb is dropped a few times although not excessively).

A great summer movie has come early to the theaters.

Heroic Stories is an email publication that empahsizes the good in people. Each story describes a “normal” person who has done something to improve the life of another person. I’ve been subscribing for years now. If you aren’t getting this in your email you should subscribe. Don’t worry, they won’t spam you.

Well, a few months back I submitted a story about Honeybun. It was chosen for their publication in 2 February 2005 issue. So for your reading enjoyment, here is Honeybun’s story:

My wife Christy is the kind of person who meets people easily. At the movies I get snacks while she finds seats in the theater. By the time I get back with popcorn, she introduces me to the people sitting next to her.

She found our second dog by striking up a conversation with a man at the store. He had just moved into a condominium and didn’t have room for his yellow Labrador retriever. It just so happened we were looking for another Lab. If she were in sales, people would call her a networker; in her case, she just enjoys meeting new people.

On June 9, 2004 a hailstorm hit the Denver area in Colorado, and property damage totaled over $150 million. I was at work during the storm when Christy called from a store parking lot. She was under an overhang watching the hail batter the cars. “You wouldn’t believe how bad this is,” she said. “It’s coming down so fast I can barely see the cars”.

A few seconds later, “I didn’t think it could get worse, but it is,” and she described golf-ball-sized hail pounding the lot. “There aren’t any leaves on the trees any more.” She could only watch as cars were dented and windows shattered. The storm was so loud I could barely hear her over the phone.

Then — thinking ahead — Christy went back in the store and bought a disposable camera to take pictures of the storm and the resulting damage for the insurance claim that would need to be filed.

While taking pictures, Christy noticed one elderly woman who looked like she needed help. The windshield of her car had spider web cracks. Christy took pictures of the lady’s car and shattered windows, got her phone number, and promised to call when they were developed.

Two days later, Christy kept her word. She called the woman to get a mailing address to send the duplicate pictures. Instead of the quick conversation she had planned, Christy spent over an hour talking with the woman, giving her advice on how to report the insurance claim and how to make sure she got a fair deal on repairs. As a result, Christy put off errands she had been planning that day. The woman appreciated
Christy’s effort so much she asked to take her out to lunch.

Our car took about $10,000 worth of damage during the storm. While the storm was at its peak, Christy was upset about the damage to our car. But instead of moping in her own misfortune, she took the opportunity to help someone else. Her generous spirit is why I was first attracted to her ten years ago and why I love being married to her today.

All the news reported by mainstream medai coming from Iraq seems to be bad. The AP News headline today tells us that two more U.S. soldiers were killed in Iraq. You’d think the terrorists…excuse me, “insurgents” (wouldn’t want to offend the terrorists you know) were winning.

Well here is a story from an Australian news radio outlet that you won’t hear about in the States (hat tip James Taranto). It might make people think the Iraqis want a democracy:

The Iraqi police have investigated a case in the village of al-Mudhariya, which is just south of Baghdad. The villagers there say that before the election insurgents came and warned them that if they voted in last weekend’s election, they would pay.

Now the people of this mixed village of Sunni and Shia Muslims, they ignored the threat and they did turn out to vote.

Great news. People of Iraq killing terrorists? The silence in the U.S. media is deafening.

The Univesity of Colorado doesn’t need another scandal. It has one though. The chairman of the ethnic studies department, Ward Churchill, called the victims of 9/11 “little Eichmann’s”, the architect of the Nazi mass murders. His essay is one big anti-American tirade. What isn’t in the news is that he also refers to U.S. troops in the first Gulf War as nazi’s. “It was a performance worthy of the nazis during the early months of their drive into Russia.” Churchill was forced to resign his chairmanship. Colorado Governor Bill Owens says that isn’t enough. He wants Churchill fired.

What is it with Churchill that he feels the need to label people who love and fight for freedom as Nazis? The people who died in the attacks are more evil than the killers (who he calls “combat teams” instead of terrorists). What I find most amazing is that Churchill only holds a Masters Degree. Usually you have to hold a Ph.D. to reach that level of moral idiocy. He apparently has done it through self-study.

Should he be fired? Yes. I think it was Governor Bill Owens who said Churchill has the right to free speech, but we don’t need to pay him to say it. I think the University can fire him for cause. Free speech doesn’t cover slander. Equating those who died in the 9/11 attacks with nazis is blatantly a slander on the victims of terrorists.

Then yesterday when the CU regents were meeting to discuss Churchill’s employment, about 100 of his supports showed up to the meeting and caused a disruption. Two had to be arrested.

Governor Owens released a brilliant statement. He turned the speech of the leftists back on themselves:

“I appreciate the fact that the C.U. Regents have taken the necessary first step in the formal evaluation of Ward Churchill’s employment status. However, I deplore the behavior displayed by some students at the Regents’ meeting. Their abhorrent behavior underscores the culture of violence that can be spawned by inflammatory speeches and essays, such as those by Mr. Churchill.”

“Culture of violence.” That is great. I hope the students are proud of themselves. Their respect for Churchill is as respectable as their actions yesterday. That is to say, not at all.