we’re on our way to Las Cruces. This is no temperature for a vacation.

Aurora Mall in Aurora, Colorado (a suburb just east of Denver) has had a reputation for a gang problem for years. Last night the danger peaked in a shooting in the mall.

One person was shot and killed and two people were wounded after an argument escalated at the mall Tuesday night.

Police were able to immediately apprehend the suspects and recover the weapons suspected in the shootings.

I pray for the victims of the violence, that the family of the woman who was killed will be comforted in their grief and those wounded will recover.

We can’t have people shooting others in public spaces with impunity and expect to remain a civilized society. These thugs didn’t care who they shot. One of their victims was a woman in her 50s or 60s who got caught in the crossfire.

It’s time for Aurora to get tough on gangs again. Hillary Duff and Heather Locklear star in The Perfect Man. Hillary Duff plays Holly, the daughter of a single mother, Jean (Locklear). Jean is desperate to find a good man. When she dates, she has high expectations for a lasting relationship and gets heart broken when the boyfriend leaves. Jean moves her and her daughters to a new town after each relationship where the pattern starts over.

Holly decides she is tired of moving when they settle in Brooklyn. She comes up with a plan to invent a secret admirer for her mother who is the perfect man so that Jean will be happy and they wonâ€™t have to move again. Holly gets lessons from her friendâ€™s uncle and restaurant owner Ben played by Chris Noth in how the perfect man would treat a woman.

Meanwhile, Holly meets a boy at school and experiences her first love.

The show stealing performance was from Mike Oâ€™Malley playing Lenny – an overly enthusiastic but inept suitor for Jean. His idea of romance was a Styx concert, one of the funniest scenes in the movie.

I was expecting a â€œchic flickâ€? with an over-the-top romantic dating movie. It even has the obligatory girls-dancing scene. However, the movie was well acted and not overplayed. Movies like this have a tendency indulge in the teenage angst and focus on the tears of the characters. The Perfect Man managed to avoid that pitfall for the most part. The scenes of conflict between Holly and Jean were kept brief and not overly emotional which served to subtly emphasize the charactersâ€™ problems. Even the girls-dancing scene was mercifully short. The biggest distraction in the movie came from the gay bartender at Benâ€™s restaurant. While some of his scenes were funny, the character did not have any impact on the plot and was irrelevant to the story. It seems the only reason he was in the movie at all was to provide a gay character. If not for his scenes where he comments on wanting to be with other men, the movie probably would have received a â€œGâ€? rating.

This movie about women dating does have more to offer than a mere rehash of Mermaids or Sleepless in Seattle. The comedy is well done with good timing and the drama is not overplayed which offers a sense of realism.

Turns out I’m Easy Rider. Is that a good thing?

What Classic Movie Are You?
personality tests by similarminds.com

Went to the Ren Fest this past Saturday with a big group of friends. This is the first time we went in costume – gypsies. It was fun. The best part was when three of our group got on stage at the hypnotists show. Our gypsy king pretty much stole the show there when the hypnotist told him to act like a woman and he started doing stripper poses. 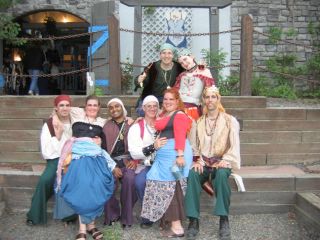 Get your geek on.Â 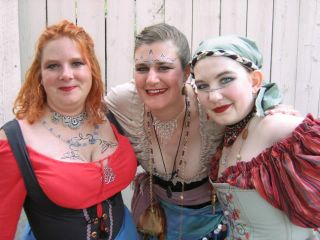 And Honeybun was looking good: 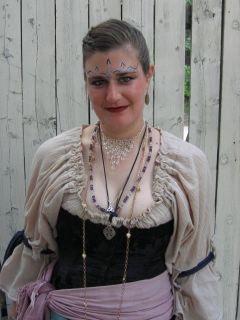 Academics are frequently criticized for not having real-world knowledge. That is, they know all the theories and advise people on how they should run businesses or create policies, but have no real experience on what the consequences of implementing a policy would be.

Having been raised in a household with no links to corporate America, Eisenberg was intrigued by the possibility of learning about the “real world” of organizational communication.

Determined to become fluent in both management and communication, and under the expert guidance of Dr. Peter Monge, he immersed himself in management theory and practice, publishing work on organizational communication networks and superior-subordinate communications. Eisenberg received his doctorate in Communications from Michigan State university in 1982.

Eisenberg illustrates the logical flaw in academic thinking. The best way to get “real world” experience is self-evidently not to remove yourself from the real world. Yet for academics, it is the preferred method.

What kind of Jedi are you?
I’m a Jedi Master:

You are the best the Jedi have to offer. You have great wisdom and your combat abilities are hard to match. The Force is your ally, and it is useful to solve difficult problems, to help you push yourself to your limits and to accomplish seemingly impossible feats. Patience and inner strength have made you the person you are now.

You are the pinnacle of the Jedi Order.

The Anchoress pointed me to this quiz about what wise quotes fit you. Here is my result:

*************
Your wise quote is: “The best antiques are old friends” by Unknown… Your buds is the source of your happiness (maybe not all but still). Even if it’s just one, a couple or a whole group they are the ones you can’t wait to see. It does not matter if you’re shy with everyone else or not, with them you let your true spirit shine and can be as loud as you want. They accept you, and you love them for that.
What wise quote fits you?(pics) UPDATED
brought to you by Quizilla
*************

There are supposed to be some pics that go along with the answers, but they don’t seem to be working at the moment.