Alice was born on July 10, 1946 to John and Violet Ward. She died this morning, April 9, 2009. She is survived by her husband, Tom Nelson, and two brothers, James Ward and John Ward. She was proceeded in death by her parents, a brother Thomas Ward, and her sister Carolyn Whitaker.

Alice was my aunt. She was the kind of person that just made you feel better when you were around her. The world is a dimmer place with her not being it.

My uncle, Pat Ambrose, died today. My grandmother has lost two of hers sons to brain tumors in a little over a year.

Joe Rosenthal died today at the age of 94. He is best known for taking the most famous photograph in WWII – raising the flag at Iwo Jima. 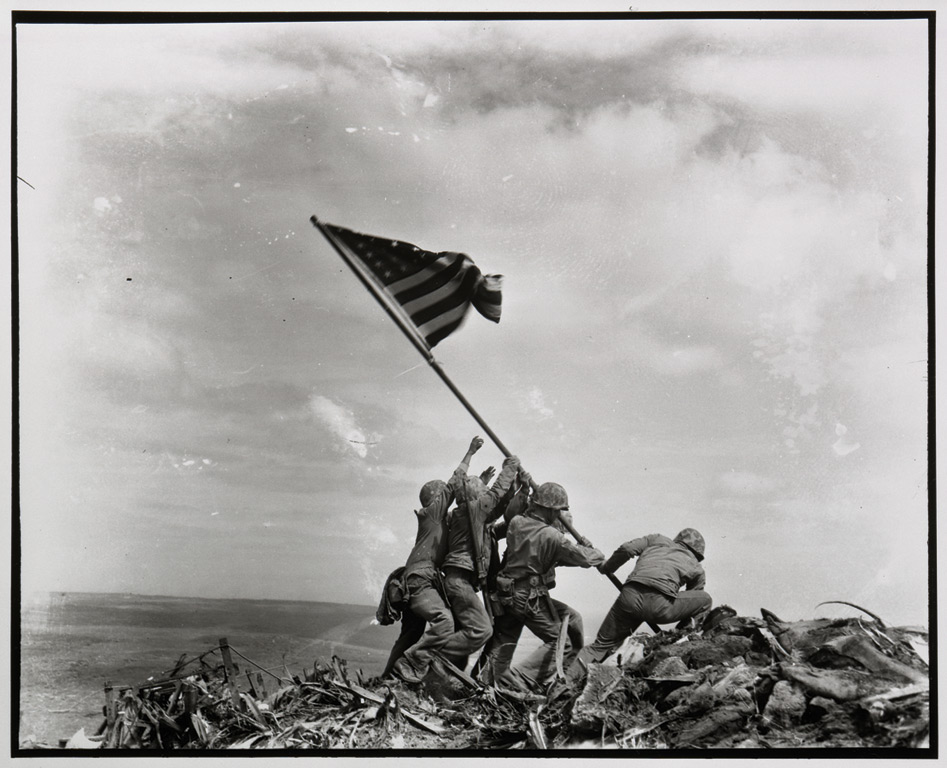 What many people don’t know is that three of the flag raisers died in the following days at the Battle of Iwo Jima.

When asked if the Marines posed for the picture Rosenthal said if it had been posed he would have ruined it by choosing fewer men and making sure their faces could be seen.

Right place at the right time. God bless Joe Rosenthal and the Marines of Iwo Jima.

Buck Owens died today. I expect my boss will not be in the office next week as I’m sure he’ll be taking time off to mourn his favorite country music singer.

Buck Owens was country music back in the 60’s and 70’s. I remember watching the TV show Hee Haw with my grandparents back in the day. Who could forget that red, white, and blue guitar?

Buck Owens even crossed political boundaries. When an avowed liberal like my boss and proud conservatives like the Powerline guys both love Buck Owens, what could be more American than that?

Here is the biography read at Carolyn’s funeral. Even though I knew all of this, I’m still impressed when I see her accomplishments in one place. She was driven to succeed.

Carolyn Frances Whitaker was born February 21, 1948 in Denver, CO. Her parents were John Ward and Violet Marie Hitchell Ward. Early in her life Carolyn lived in Chula Vista, CA, Platte, SD, and Orange, CA. She was the fourth child of five. The year that she spent in Platte with her grandmother was especially significant in her life.

Carolyn graduated from Orange (CA) High School in 1966. She received a Bachelor of Science degree from the University of California at Irvine in 1973, specializing in Civil and Environmental Engineering. Carolyn was employed by Rockwell International on the Space Shuttle program in the 1970’s in Environmental control and Life Support Systems.

Carolyn also did environmental airport noise consulting for J.J. Van Houten and Associates, and thermal engineering for TRW Systems. She became a registered Professional Engineer in Mechanical Engineering in 1978.

With a move to Tucson, AZ in 1994 Carolyn became a Certified Professional Counselor and Certified Marriage and Family Therapist in Arizona. She worked as a Mental Health Counselor for Palo Verde Hospital, and was also in private practice. Later she did substitute teaching in the Marana Unified School District.

Carolyn’s varied interests have included Making clothes, painting, and writing. She taught sewing classes at Stretch & Sew in the 1980’s.

Carolyn became a member of the Church of Jesus Christ of Latter-day Saints in 1990. Her callings in the church included ward librarian, in-service teacher where she trained other teachers, stake missionary, and primary teacher. Recently, she served a mission at the Tucson West Family History Center assisting members of the Church as well as many who are not members of the church who were interested in searching their genealogical roots.

Carolyn was diagnosed with cancer in the lower abdomen in late 2005. After a short struggle with the cancer, she passed away on January 31, 2006. Carolyn is survived by her husband Will Whitaker. She is also survived by three siblings: James Ward of San Diego, Alice Nelson of Redding, CA, and John Ward of Centennial, CO. She was preceded in death by her parents and a brother Thomas Matthew Ward. Other survivors include her daughter Bonnie Harper and son-in-law Kevin Harper, and their children Margaret, Matthew and Andrew.

My aunt Carolyn died this morning of complications of colon cancer. The news shocked me; I didn’t even know she was sick.

When I was growing up, we would visit her family in California a couple of times every year. I still associate her with Disneyland and Knott’s Berry farm.

She is survived by her husband, daughter and three grandchildren. May God bless you Carolyn.